Skip to content (Press Enter)
HomePortugalWhat is the Silver Coast of Portugal? 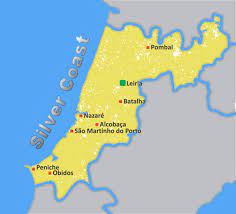 When planning to move to Portugal, you should consider the location, climate, and attractions of the Silver Coast. You can also look into the property prices. If you are planning to live in the area for a long time, you might consider investing in a property there. The cost of living is also very reasonable here.

The central region of the Silver Coast is one of the most popular tourist destinations in Portugal. The region has excellent infrastructure and is well connected to major roads and rail systems. In addition, it is within an hour’s drive from the international airport. It also boasts a large expat population. The area is also a popular surfing destination.

This coastal region comprises several smaller towns and villages and is the perfect choice for those looking for a relaxing and unwinding holiday. You can find some beautiful beaches within walking distance, and the local people are very welcoming to foreigners. It is also accessible from other parts of Portugal, including Lisbon and Porto.

The region’s proximity to Lisbon and Porto airports makes it easy to reach the Silver Coast by car. It’s only about an hour’s drive from either city. However, if you’d prefer to avoid driving and rely on public transport, you can take an air-conditioned bus that will take you to the coast in about an hour.

The climate is mild and sunny, with temperatures rarely falling below double digits. The summers can reach 40 degrees Celsius, but the average is around 30 degrees Celsius. During the winters, it is cool, but not freezing. However, the region is subject to occasional rain, but the rain doesn’t come in the form of ice-cold drizzle.

The climate on the Silver Coast is a perfect blend of Mediterranean and Atlantic climates. The hottest months of the year are July and August. Temperatures remain moderate during winter, with only the wettest month being December. There are approximately 275 days of sunshine per year.

The Silver Coast of Portugal offers many attractions for visitors. The region boasts stunning beaches and sleepy fishing villages. You can also experience local traditions and live music. There are many festivals that take place throughout the year. One of the largest is the Nos Alive festival, which takes place in Lisbon in July. The festival features top acts from the world of rock and pop. Other notable events include village festas and the Santo Antonio festival, which honors the patron saint of fishermen.

The Silver Coast is also home to several wine regions. There are numerous wineries where you can taste wines and brandy. You can also visit a brandy distillery in the 18th century Quinta do Sanguinhal. The town of Caldas da Rainha was once famous for its therapeutic thermal waters, but today is more well-known for its ceramic production. The town is home to a famous ceramics shop and hosts a colourful market every weekday morning in Praca da Republica.

The town of Nazare is another popular attraction along the Silver Coast. The town has some of the world’s biggest waves, with one of the largest recorded at 101.4 feet. The town is also home to several camp sites and a small amount of accommodation. The town is a great place to watch surfers as they wake up early in the morning to head out in their tiny boats. Fisherman wives often wait on the shore in colorful seven-layer skirts.

Another attraction worth checking out while in Portugal is the Lisbon Ice Museum. This museum has a surprising amount of information in English, and there are marked walking trails.

The climate of the Silver Coast of Portugal varies from region to region, but in general, you can expect mild winters, hot summers and mild autumns and springs. The coldest months are January and February, and the hottest are July and August. The region doesn’t experience much snowfall, and it receives 21 inches of rain per year. However, the region is prone to forest fires and flooding.

Portugal’s Silver Coast region is located halfway between the capital Lisbon and the capital Porto. This makes it very accessible by train, bus or car. The average temperature is around 30 degrees Celsius (86 degrees Fahrenheit) during the summer and 16 degrees Celsius (72 degrees Fahrenheit) in winter. The region receives 275 days of sunshine per year, and the winters tend to be mild. However, the summers are hot and dry and you should expect temperatures to exceed 30 degrees Celsius.

The Silver Coast of Portugal is accessible by air and train. It has an excellent road system and is connected to all major highways and railways. The airport is only a short distance away, and buses and taxis are readily available. It offers many great dining experiences, including some of the best seafood dishes in the world. In addition, the region has several local markets selling fresh vegetables and fruits. The Silver Coast is also home to a variety of small farms and vineyards.

The climate of the Algarve region in Portugal has a temperate climate. Summers are warm and sunny, but winters can be cold and windy. The temperature typically varies between 46 and 59 degrees F. The beaches and vineyards of the Algarve region are irrigated by the Alqueva, the largest strategic water reserve in Europe.

Property prices on the Silver Coast of Portugal are surprisingly low, making it an ideal place to buy a second home. This region is known for its incredible beaches and rocky coastline, but you won’t find as many expensive properties here. You can find both modern and traditional homes to suit your needs and budget.

Property prices on the Silver Coast are typically 30 percent lower than in the Algarve. It has less development than the southern Algarve, but is still very popular with surfers and European tourists. It is an hour’s drive from the capital Lisbon and is close to some of Portugal’s most beautiful beaches and golf courses.

As the area has become increasingly popular with expats, property prices on the Silver Coast are affordable and offer great value for money. This area offers a unique combination of cheap living and affordable luxury, and property values are growing every year. The area is a good place to buy a second home or rental property. Moreover, it offers easy access to Europe, making it an excellent investment.

The Silver Coast offers a variety of lifestyle options for those who want to enjoy a more relaxed life. The area is known for its long sandy beaches, sunshine and warm climate. Some parts of the coast are quaint and traditional, while others boast exclusive casinos, chic boutiques and top-class restaurants.

Unlike Lisbon, property prices on the Silver Coast are still relatively affordable. This makes it an attractive option for those who want a sea view, a quiet and picturesque location, and an affordable way to live in the city.

Portugal’s Silver Coast is a beautiful stretch of coastline tucked away on the western side of the country, bordering the Atlantic Ocean. While the Algarve has become the most famous coastal region of Portugal, the Silver Coast has remained relatively unspoiled by tourism. This region offers clean beaches, water sports activities, and world-class golf courses. There are also plenty of public transportation options for visitors.

Getting to the Silver Coast from the capital, Lisbon, is easy. Taxis are available at both the airport and the city center, and fares are affordable. To avoid the hassle of lugging a suitcase from the airport to your accommodations, you can hire a taxi driver to pick you up right at the airport. There are even cars available to transport up to eight people.

Silver Coast accommodations can range from small apartments to spacious two-bedroom villas. Prices are affordable and housing options are plentiful. Whether you want traditional Portuguese villas or modern beach cottages, there’s a style and price for you. The region has great beaches, beautiful landscapes, and a relaxed atmosphere.

Silver Coast accommodations are located near the city of Leiria, which is a central point for visiting the beaches. You can also book accommodations in nearby towns, such as Caispe, in a small-town-style setting. The cost of living is low, which makes it a popular destination for retirees, expats, and tourists.

While a car can often be helpful, public transportation is also excellent in many areas of the Silver Coast. The train station in Sao Martinho do Porto is also a convenient option. The trains are slow, but are relatively affordable if you know the schedules. A hire car is often expensive, so taking advantage of public transport and taxis will save you money.