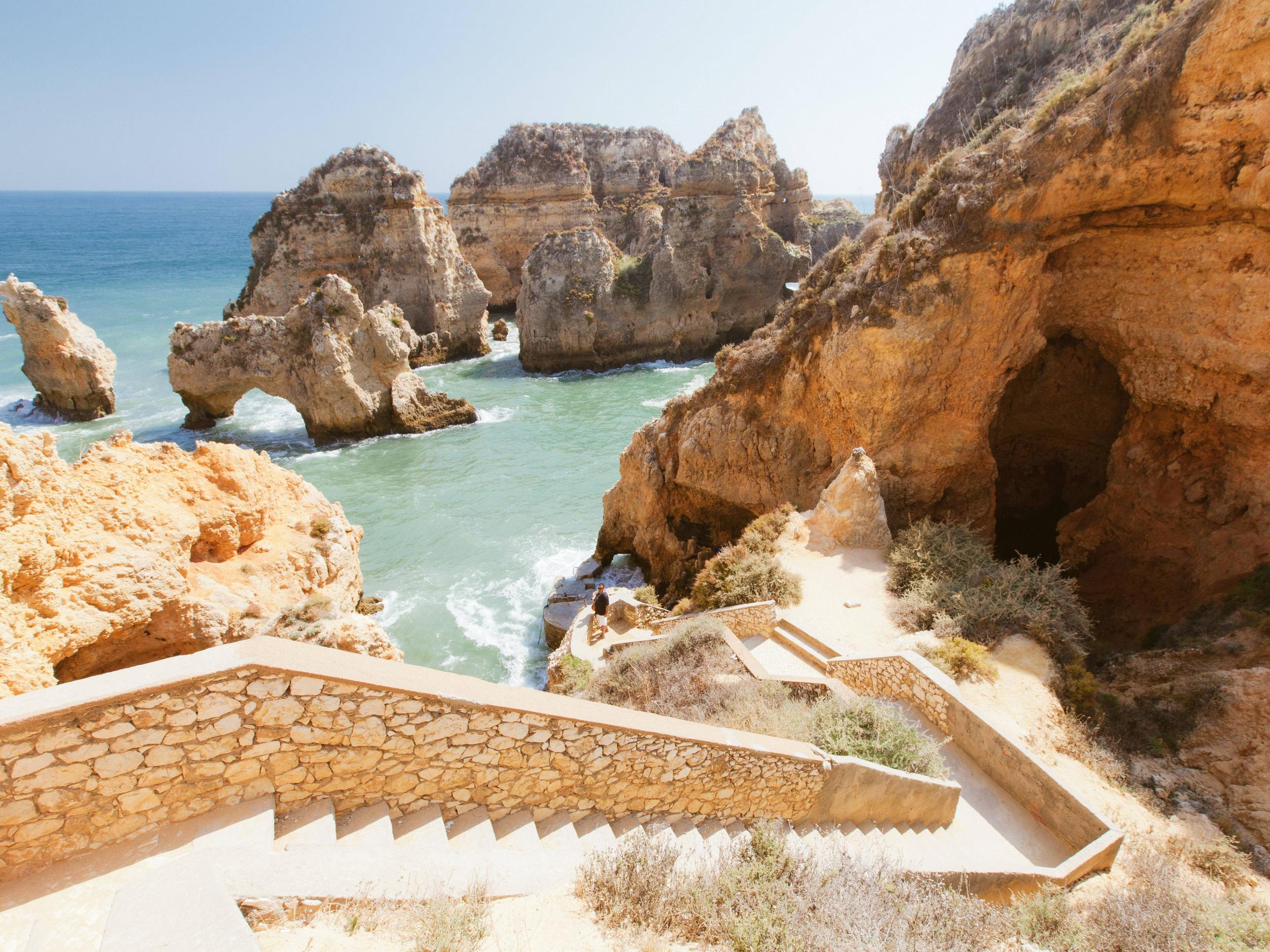 If you’re looking for some great fishing in Portugal, check out the Algarve. Its stunning Atlantic beaches and golf resorts are the top draws, but the Algarve also offers more than just golf. The central coast, between Faro and Lagos, is lined with villas, hotels, and bars, while the western Atlantic coast is less developed and more rugged.

Fly fishing in Algarve is very popular, with the region attracting tourists of all ages. This family destination also offers a wide variety of other activities, including hiking, cycling, and water sports. The area also offers an abundance of natural scenery and some of the best beaches in Europe. Guests can also find a great deal of local cuisine.

Algarve offers some of Europe’s finest fly fishing waters. Anglers can fish for sea bass, largemouth bass, and other species. Deep waters are also popular with anglers. The Algarve’s nearby waters are full of Snappers and Seabream. These fish can weigh 20lbs or more.

If you are not a natural fisherman, you can hire a guide and learn about the best techniques to catch a wide range of species. The Algarve also has many fishing charters to choose from. A good guide will be able to give you plenty of advice on the best locations to go fly fishing.

Algarve also has a number of great lakes. There are many species of saltwater fish, including sea bass and spotted sea bass.

If you’re looking for a relaxing fishing getaway, consider visiting the Algarve region. This Portuguese region is one of Europe’s most popular tourist destinations, and the 130-mile coastline offers ample opportunities to catch mullet, mackerel, bream, and other saltwater species. It also offers opportunities for freshwater fishing.

This region is home to over 300 days of sunshine a year, so it’s no wonder that many locals prefer to be on the beach. Others, however, prefer to enjoy their vacation by fishing in the sea. A common sight in Algarve beaches is a group of fishermen with poles in the sand and two or three lines in the water. Then they wait for a bite. The 200-foot-high cliffs provide the perfect setting for fishing.

The Algarve’s waters are home to more than 200 species of fish. Some of these fish are popular for sport fishing, and some fishermen even catch 300kg marlins. Other popular fish include white hake, mullet, and snapper. You can also catch sardines, scabbard fish, and sharks.

Cliff fishing is a traditional sport in Portugal, where fishermen cast their fishing lines from the cliffs into the deeper seas below. Here, they’ll find mullet and sea bass. Popular fishing spots are near Monte Clerigo and Aljezur. However, be aware that cliff fishing is dangerous and may not be suitable for everyone.

The Algarve is known for its scenic cliffs, which are perfect for fishing. Cliffs offer calmer waters and are an excellent place to catch small fish, including bream. In winter, crackers are more likely to take streamers. Fishing on cliffs is also inexpensive and great for families.

This small beach is popular with locals. It’s surrounded by golden limestone cliffs. This area is also a good place for snorkelling, with various sea creatures. It’s also a great place for picnics and nature walks. Besides the beach, the cliffs are lined with caves and arches.

The Algarve has a diverse marine life with over 200 different species. Some of the most common species include tuna, marlin, and sardines. There are also sharks, including blue sharks, mako, and hammerhead.

The Algarve is considered to be one of the best fishing locations for marlin in Europe. Its warm waters provide a favorable habitat for marlin. Fishing charters offer troll trips and other techniques to target the big fish. Some guides use horse mackerel and live bait, while others prefer drifting. Marlin fishing charters are available in several destinations around the Algarve, including Madeira. Several competitions are held in this region for those keen to catch marlin.

The Algarve’s oceans are rich in blue marlin, which are often bigger than 400 pounds. These fish are a great way to enjoy an adrenaline rush during your fishing trip. These fish are usually caught twelve to fourteen miles off the coast, so you’ll have to travel a considerable distance from land to catch them.

There are two types of blue marlin. The blue marlin is one of the largest species in the ocean, with an average weight of 350 kilograms. White marlin, on the other hand, is smaller than blue marlin, but can weigh as much as 50 kg.

If you’ve always wanted to try your luck at catching swordfish, the Algarve is the place to go. The waters off the Portuguese coast are among the best in Europe, and you can hook swordfish, blue shark, tuna, Bonito, Dorado, and other exotic fish. The warm waters are also perfect for coarse fishing, and fishing tournaments are held regularly in summer.

The best time of day to fish in Portugal varies from place to place, and it’s important to know when the tides are the lowest and highest before heading out. When the tide is high, the water is more oxygenated, and this makes the fish more active in search of food.

You can also try fishing from the beach if you’re feeling adventurous. Some of the best beaches to fish in the Algarve include Praia de Faro, Praia da Fuseta, and Praia de Olhao. In addition, you can also try your luck at fishing in rivers, such as the Rio Arade and Rio Sequa.

Tuna fishing in the Algarve has long been popular. Since the Phoenicians began fishing here, tuna have been taken from the shores of the Algarve. Although overfishing is a serious issue, the Algarve coastline is a prime location for catching tuna.

Some of the Algarve’s best fishing is done a few miles offshore. For example, there are many beaches off the coast that were once homes and working places for tuna fishermen. One of the best places to see the change in usage is at Praia do Barril, where the buildings were used by tuna fishermen from 1841 until 1967. Today, the buildings are used for tourist cafes and toilets.

Other species of tuna can be caught off the coast. A number of fishing charters in the Algarve target Bigeye tuna using artificial lures. If you prefer natural bait, you can also catch Albacore or Bluefin tuna off the coast. Marlin fishing is also possible offshore.

The Algarve sea is home to over 200 species of fish. Some of the most common fish include tuna, conger eels, white hake, mullet, snapper, and sardines. There are also sharks such as the hammerhead, blue shark, and mako.

The Algarve region of southern Portugal is famous for its whitewashed fishing villages, golf courses and luxurious resorts. Its coastline is mostly developed, with hotels, villas and bars lining the central coast between the cities of Faro and Lagos. However, the rugged interior and western Atlantic coast are far less developed.

The waters off the western Algarve are known for its plentiful sea life, which is often compared to those of the Atlantic or Mediterranean. The fishing opportunities are ideal for those interested in catching bass, bream, sardines and mackerel from the beach. Although beach casting is popular, it is better to fish in deeper and choppy waters. Beginners should bring well-balanced fishing gear and use the right bait, such as prawns, sardines or worms. It is also a good idea to ask locals for tips about where to find the best fishing spots.

Some fishing charters will offer fishing trips in the Algarve. One of the best companies is AlgarveXcite, based in Vilamoura. Their charter boats will take you out to the best fishing spots in the region.